The Monthly Confidence Index for the equipment finance industry (MCI-EFI), published by the Equipment Leasing & Finance Foundation (ELFF), indicated a decline in August relative to July. The August index was at 66.6, a decrease from 72.9 in July.

The index reports a qualitative assessment of both the prevailing business conditions and expectations for the future as reported by key executives from the $900 billion equipment finance sector.

Potential tax increases and the political landscape at the federal and state levels are issues of concern, according to MCI-EFI survey respondent Dave Fate, CEO of Stonebriar Commercial Finance, Plano, Texas.

“I have been optimistic on the near and long-term future of the equipment leasing and finance industry,” Fate said. “As was proven out during 2020, secured loans and leases always outperform all other asset classes. In my opinion that will never change. My only concerns are things outside of our control, such as the potential increase in tax rates and the political landscape that exists today both at the federal and state levels.” 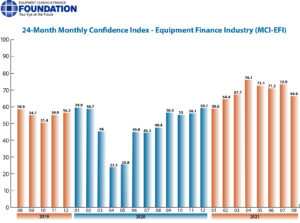 “I think we are currently chopping wood and grinding through an abundance of liquidity, supply chain disruptions, ever narrowing margins and competitive recruiting environments,” said David Normandin, president and CEO, Wintrust Specialty Finance, Irvine, California. “This will continue for the near future and our industry will adapt and find ways to win.”

Respondents to the MCI-EFI are comprised of a wide cross-section of industry executives, including large-ticket, middle-market and small-ticket banks, independents and captive equipment finance companies.

There are no upcoming events at this time.