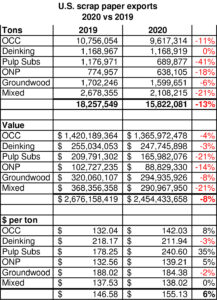 While shipments of old corrugated containers (OCC) saw the heaviest decrease in terms of tonnage – more than 1.1 million tons – pulp subs took the heaviest hit in terms of percentage, dropping by 41 percent. Pulp subs and mixed paper each saw a 21 percent drop in dollar value of the tonnage shipped – the largest of any grade category.

Exports to China, which were banned by the Chinese government after the end of 2020, dropped 18 percent – or almost 1.1 million tons – during 2020, to a total of 4.8 million tons. That contrasted with an annual high of almost 15 million tons in 2015. During 2015, the U.S. shipped 8 million tons of OCC alone to China – a number that decreased to 3.5 million tons last year.

Exports to India, the next largest market, were down 28 percent, or 920,000 tons in 2020, for a total of almost 2.4 million tons. As China placed restrictions, and eventually a complete ban on imported scrap paper, India was frequently mentioned as a market that would pick up some of the displaced tonnage.

During its peak years, China typically accounted for around half of all U.S. OCC exports. In 2020, it made up about 36 percent, while the next two largest markets – Vietnam and India – made up about 25 percent.

Exports to major markets Indonesia and Thailand also were down sharply in 2020, while shipments to Malaysia, Singapore and Mexico saw substantial increases. Laos, which never imported a ton of OCC from the U.S. before 2019, became the 16th largest market in the world last year, pulling in about 35,000 tons, up 245 percent compared to 2019. Meanwhile, OCC exports to Saudi Arabia plummeted 81 percent last year, from about 79,000 tons in 2019 to about 15,000 tons, representing one of the largest year-to-year declines for OCC. Another was a 96 percent drop in shipments to Guatemala, from about 33,000 tons in 2019 to about 1,300 tons.

Mexico, the dominant market for U.S. deinking grade exports, increased its buying by 16 percent relative to 2019. Mexico mills imported more than 750,000 tons of deinking grade fiber, a gain of more than 101,000 tons.

That improvement nearly offset reduced buying from Canada and India.

Overall, exports of deinking grades in 2020 fell a scant 47 tons below the total for 2019, a statistical dead heat.

All major markets for pulp substitutes saw significant reductions in U.S. imports in 2020 relative to 2019. Overall, exports of pulp subs were down 41 percent, or nearly a half million tons in 2020.

Despite a 16 percent reduction in imports of U.S. groundwood grades other than ONP, China remained the dominant market for the category last year. Of a total of about 1.6 million tons, more than 1 million tons went to China. That, however, marked a drop of 16 percent, or about 208,000 tons compared to 2019. Thailand became the second largest market for groundwood in 2020, surpassing Canada, Taiwan and South Korea. Exports to Thailand were up 441 percent, or about 188,000 tons, to a total of about 231,000 tons.

Overall, groundwood grade exports were down 6 percent compared to 2019.

Despite a ban on mixed paper imports, China found a way to bring in about 149,000 tons of the grade, almost double its take in 2019.

Overall, mixed paper exports were down 21 percent, or more than a half million tons, last year, to a total of about 2.1 million tons.

There are no upcoming events at this time.